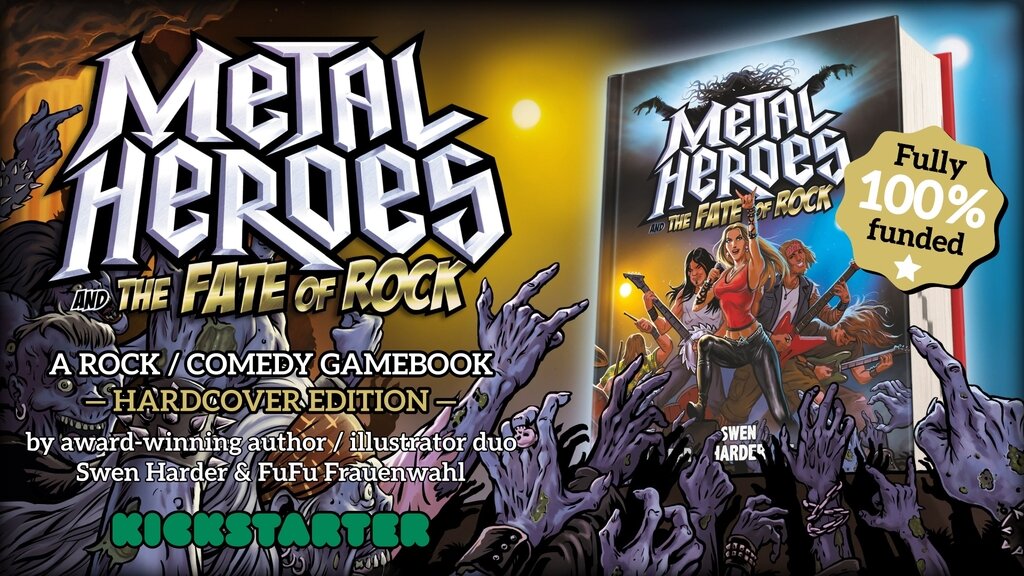 
Yes, we’re head-banging into the final week of the Metal Heroes campaign!

A few new guys have joined the Heroes’ gang and we’re pretty close to the next stretchgoal HERE I GO AGAIN at 7,400, forcing me back on the computer to write some more sections. But no complaints, I would love to!

I guess, most of you know this, but next Thursday, November 26, is Thanksgiving (or how we Germans call it: “Erntedankfest”). And to celebrate this and the cooperation with my guys from Garagedays, we’ll do a “Goalgiving” that day for free. What exactly you’ll get for the JUKE BOX HERO goal, I won’t tell you now, but it has something to do with music. 😉

Nevertheless, I hope you all will support us in those final days, making this special gamebook even a bit louder with the other goals ahead.

Unbelievable, we are in the final two weeks of the Metal Heroes campaign! But still a long way to go, and a lot to discover…

Yesterday the community (mainly Steve, throwing another 2 Euros in the pot) cracked the 7,000 stretchgoal GARAGE BROS., adding a complete extra album to all Special Editions!

It’s the 3rd studio album "Here it comes" from the Austrian Hard Rock/Heavy Metal band Garagedays. The CD includes 10 tracks, produced by Flemming Rasmussen (known for Metallica’s “…And Justice for All” among others).

Garagedays are linked to the Metal Heroes project from the very first days: At the beginning I searched for newcomers to help me produce the Metal Heroes soundtrack, and the guys supported me with all they had. At the end, I decided to collaborate with the label Napalm Records and Garagedays were out... But fortunately they didn't hold a grudge but remained very supportive to the project. So now the day has come to pay back the loyality! BTW: Their newest album "Something Black" hit the shelves just a week ago!

With this extra the Special Edition has caught up to the content of the German original and will get—thanks to the PRODUCER pledge and the bonus illustrations from the stretch goals—even more! YEAH!

Only 370 Euro away lies the HERE I GO AGAIN goal, which will send me back to the keyboard to write a couple of bonus sections.

After that, BACK IN BLACK would add another 3 extra full-size panels from FuFu to the book. But to achieve this at 7,800, we will need a little boost, I guess.


Believe it or not, we are now heading into the second half of the Metal Heroes and the Fate of Rock campaign. And we would like to take the opportunity to thank all of you who've chipped in and supported us so far!

Anyway, yesterday we reached strechgoal #6 BREAKING THE LAW. This adds the hardest difficulty level, “Super Freak”, to the rules:

Of course, there's more work to do here than just adding a circle to tick on the Metal Journal. You'll see!

Next up comes GARAGE BROS. at 7,000. This one will add an entire extra CD of music to the Metal Heroes Special Edition. It’s the debut album of a band who supported us making the very first German edition, having major impact on the whole project. And no, it’s not Metallica.

Later, at 7,400, HERE I GO AGAIN will add several new sections, all across the book. We've had some funny ideas which will add some more spice to the story.

And as an outlook, further on a waits BACK IN BLACK. I’m sure, with your support it’s just a matter of time until we reach that can reveal that one. But clever people probably can already guess what might be hiding behind this stretch goal.


Sidenote: AC/DC has released a new album a few days ago... And it's not too bad for some ol’ rockin’ Aussis!


Tonight you helped us to surpass stretchgoal #5 YOU AIN’T SEE NOTHING YET, which brings FuFu into play: He will draw 2 new one-pagers (and hopefully there will be some more later).

Just 100 Euros away awaits the next exciting goal, BREAKING THE LAW. This one will add another difficulty level to the rules: The ultimate “Super Freak”, for players who like really tough challenges.

Since this goal is so close, I’ve decided to uncover the goal at 7,000 as well: GARAGE BROS. will fill the second CD slot in the case of the Special Edition by adding a complete extra album!

So there's a lot to look forward to — keep the fire burning!


First, let me greet the new backers (even if many of you may be old „Riders“, I guess. (And please excuse the spam mails today to all of you who were already backing Metal Heroes.)

Anyway, a few hours ago we reached the next stretchgoal PAPERBACK WRITER! So every book will be stamped and signed by myself to make your Kickstarter copy a little unique. Yeah!

The next one in line is YOU AIN’T SEEN NOTHING YET at 6,400. Once reached, this goal will add 2 more full-page illustrations/comic pages to the existing artwork. (Now the real fun begins, FuFu!)

Let's talk about pledges: Again, the ROADIE pledge is full… until further notice I would say. Please keep an eye on sold-out limited pledges. Sometimes backers change their mind and they become available again.


That’s all for today,